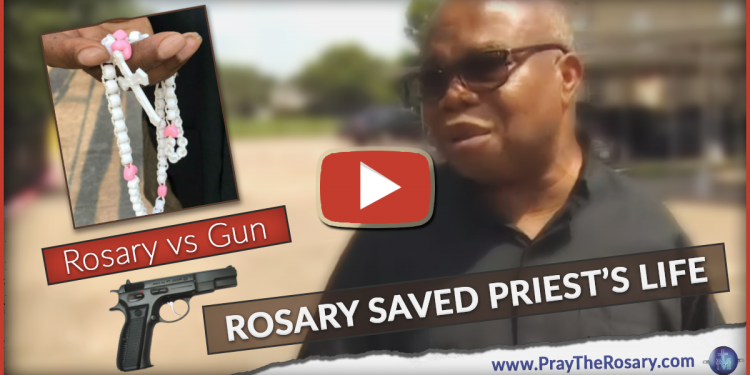 While holding out his Rosary, Rev. Desmond Ohankwere credits “divine intervention” for saving his life after four men assaulted him at gunpoint outside his home near St. Peter the Apostle Catholic Church in Houston.

The Associated Press reported that the four men involved first stole an SUV from a gas station while the owner filled it with fuel.  They then encountered the priest walking and praying the rosary in a nearby Catholic Church parking lot after the SUV ran out of gas.

The men robbed him, taking his keys and two cell phones. However, they did not take his rosary.

On his knees praying for God to spare is life, the suspect attempted to fire the gun twice, pointing it to his head. The trigger failed both times.

“When he clicked it, I thought I was gone, so then he tried it again,” Fr. Ohankwere told KHOU 11 of Houston. “I should be dead now. You should be talking about my burial.”

The men then beat the priest after the trigger misfired. Fr. Ohankwere said they even tried firing the gun a third time, but the gun again failed to fire.

Fr. Ohankwere now has bruises and scrapes on his head, arm and lower body, but God answered his prayers, though Mary’s Rosary.

“Pray The Rosary Every Day!” ~ Our Lady of Fatima