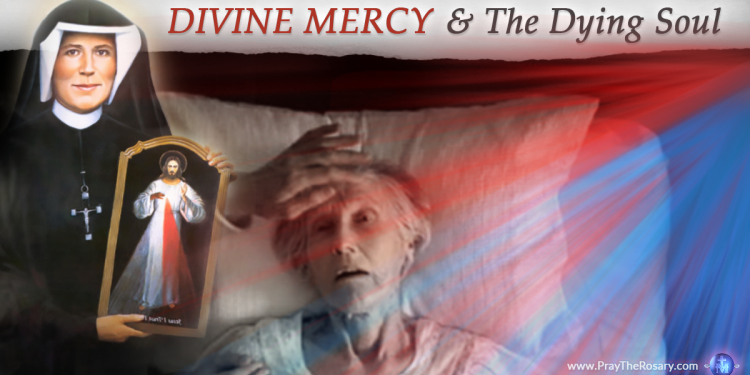 One of the best and most powerful things you can do for a loved one or a soul that you know is dying… is to PRAY THE CHAPLET OF DIVINE MERCY for them.

Listen to the words of Jesus to Saint Faustina on the power of this prayer for the dying soul.

Pray as much as you can for the dying. By your entreaties [that is, insistent prayers], obtain for them trust in My mercy, because they have most need of trust, and have it the least. Be assured that the grace of eternal salvation for certain souls in their final moment depends on your prayer. You know the whole abyss of My mercy, so draw upon it for yourself and especially for poor sinners. Sooner would heaven and earth turn into nothingness than would My mercy not embrace a trusting soul.” (Diary of St. Faustina, 1777)

Saint Faustina was often given the grace to know when a certain dying person desired or needed prayer; she would be alerted to the moment, by her Guardian Angel or by our Lord Himself. At those times she would pray until she no longer felt the need to pray, or a sense of peace came upon her, or she learned that the person had died, or heard the soul say, “Thank You!” She wrote: “Oh, dying souls are in such great need of prayer! O Jesus, inspire souls to pray often for the dying” (Diary, 1015).

One of the best means of assisting the dying is the one that Jesus revealed to St. Faustina and insisted that she use often, even continuously: The Chaplet of The Divine Mercy. Jesus said, “My daughter, encourage souls to say the chaplet which I have given to you. It pleases Me to grant everything they ask of Me by saying the chaplet. … Write that when they say this chaplet in the presence of the dying, I will stand between My Father and the dying person, not as the just Judge but as the merciful Savior” (Diary, 1541).

Earlier, our Lord said to her, “At the hour of their death, I defend as My own glory every soul that will say this chaplet; or when others say it for a dying person, the indulgence is the same” (Diary, 811).

What if the person prays from a distance? Saint Faustina had a love for the sick and dying, and she prayed for them with great fervor. The following experiences recorded in her Diary make it clear that one does not have to be at the bedside physically. She wrote, “It sometimes happens that the dying person is in the second or third building away, yet for the spirit, space does not exist. It sometimes happens that I know about a death occurring several hundred kilometers away. This has happened several times with regard to my family and relatives and also sisters in religion, and even souls whom I have not known during their lifetime” (Diary, 835).

Our Lord said to St. Faustina, “‘My daughter, help Me to save a certain dying sinner. Say the chaplet that I have taught you for him.’ When I began to say the chaplet, I saw the man dying in the midst of terrible torment and struggle. His Guardian Angel was defending him, but he was, as it were, powerless against the enormity of the soul’s misery. A multitude of devils was waiting for the soul. But while I was saying the chaplet, I saw Jesus just as He is depicted in the image. The rays which issued from Jesus’ Heart enveloped the sick man, and the powers of darkness fled in panic. The sick man peacefully breathed his last. When I came to myself, I understood how very important the chaplet was for the dying. It appeases the anger of God” (Diary, 1565).