Why the Ladybug is named after Mary. 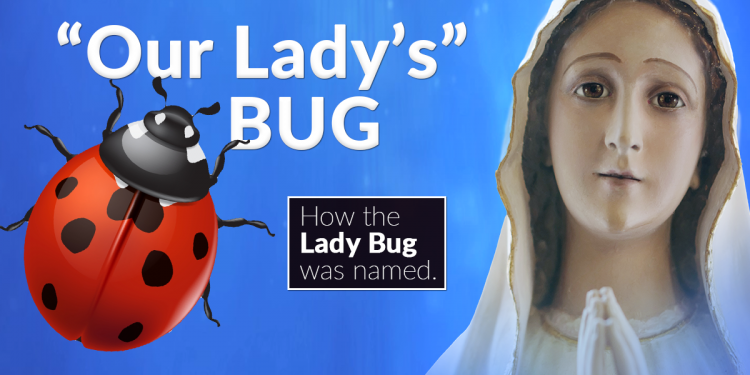 As tradition goes, during the Middle Ages a plague of small insects, most likely aphids, attacked the crops and threatened Europe with starvation. The people turned to praying for the intercession of the Virgin Mary. Their prayers were answered when a cloud of tiny orange-red insects speckled with black arrived and ate the offending pests. In gratitude, the people gave them the honorary name “Our Lady’s Beetle.” Over time, this was shortened to the “ladybeetle” or the “ladybird,” and in the United States became what we know today as the ladybug.

Another tradition finds the ladybugs name in its bright red shell that bears a striking resemblance to the red cloak the Virgin Mary is often wearing in religious paintings from the time. In Europe, the most common ladybug is the seven-spotted variety. These seven spots were seen to symbolize both the Seven Joys and Seven Sorrows of Mary.

You might catch a Ladybug Marching across the screen from time to time during our live Rosary with someones name on it. These are people who gave STARS during that LIVE Rosary. STARS are a little way to support the ministry, and a special little way to say “Thank YOU” is to have their name in “The Ladybug March” on screen.

Every night we pray the Rosary LIVE and we invite you to join our family and group and pray with us! Check out one of our live videos below. Come, what are you waiting for? Our Lady asked us to PRAY THE ROSARY everyday. JOIN US!

THE OLDER RITE OF EXORCISM AND BLESSING ...